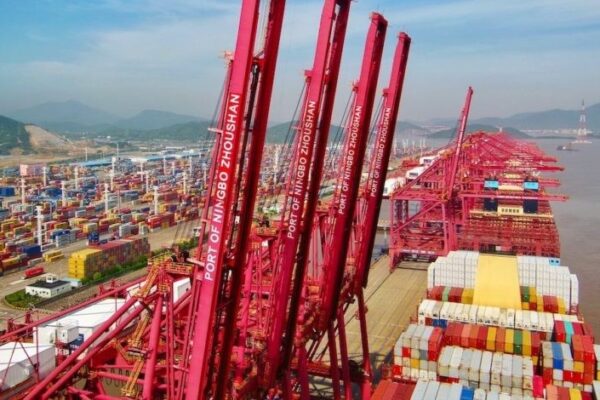 We are aware of reports that trade disruptions have affected some shipping between China and Australia, and have found the following to be the setting for the new year, 2022.

Container Shipping Out of China
State media in China is insisting that cargo volumes at Ningbo have not dropped, even as lockdown measures increase across the city that is home to the world’s largest port. Ningbo has had three partial lockdowns in the space of six months. Now the Zhejiang Province government has instigated quarantine and disinfection action for the Beilun District of the city.

Officials in that province have tightened COVID-19 restrictions due to recent community cases linked to a garment factory in the Beilun District. Processing delays and shipping disruptions are possible at the Ningbo Port; however, officials have issued passes for permitted truck drivers to enter closed locations and designated “greenways” for container vehicles to access the port area. According to Maersk Line, loading and discharge operations at the three Ningbo terminals (NBCT, NBSCT and NBTCT) are working normally, while gate-in and out operations saw some restrictions imposed on 04 January.

Meanwhile, down south, feeder operators have suspended services from late December until mid-February due to strict Covid quarantine rules for crews, threatening the ability of local seafarers to get home in time for Chinese New Year. China’s heavy quarantine rules are seeing Chinese crews – among the most numerous in the global merchant fleet – facing quarantines of up to seven weeks when they return home, while crew changes for foreign seafarers at Chinese ports have become very difficult, exacerbating the crew change crisis.

Freight has also become stuck in recent days at the land border crossing with Vietnam as the border is closed due to Covid-induced lockdowns in China’s Guangxi province.

Airfreight
In the last week of December, China saw hundreds of flight cancellations at major hubs, including Shanghai, Beijing and Shenzhen. Hong Kong also faces strict regulations on quarantine, which has led to what have been described as ‘extremely challenging work patterns.’

And the next eight weeks are expected to see some significant disruption to airfreight in China: not only will its “zero-Covid” policy lead to local restrictions, but with both the Chinese New Year holiday and Beijing Olympics at the start of next month, the government is expected to crack down on transport. Freight forwarders are anticipating few charter flights to be approved and restrictions on other flights, in particular into the capital.

Exports from Australia
The Australian Government’s trade and investment arm, Austrade, says it is aware of reports that disruptions have affected some goods entering China from Australia. Now that the 01 January 2022 implementation date for new rules on foodstuff has arrived, China Customs (GACC) has provided information to trading partners regarding new registration processes for overseas food establishments. For more information, follow this LINK.

Energy Supply in China
We last reported on the problems generated by the power crisis in China three months ago.  We are now advised that energy rationing to manage outages in China – caused by coal shortages amid a surge in power demand – has ceased since early November 2021, after government intervention rebalanced the market with measures to raise coal mines’ production quotas, says Fitch Ratings-Shanghai/Singapore. This has reduced the risk of power outages during the current winter heating season from mid-November till mid-March 2022.

As a licensed Customs Broker and International Freight Forwarder, Colless Young offers you correct, professional advice on all your import and export shipping and trade activities. Based in Brisbane, we provide a complete range of logistics services, both air and sea cargo, through all Australian ports and airports. We handle trucking, warehousing, customs clearance, quarantine inspections and fumigation treatment.